Vancouver Welcomes you! Our multicultural population, endless activities, BEAUTIFUL views, and excellent infrastructure, Vancouver is made to be visited!

Vancouver awaits your arrival. With the great Canadian Rockies as our welcome sign how could you not want to come time and time again for a visit. Our spectacular city boasts the most magnificent views surrounded by mountains and stunning nature, yet still has the city life people crave. No matter your interests, whether you want to explore the multicultural pockets of our city, enjoy a sporting game, get lost in nature or take a plunge in the sea, Vancouver has an activity for you.

Getting around Vancouver is easier than you think! With easy access to public transit, or simply walking or cycling to your destination, nothing is too far.

People who visit Vancouver are always surprised by how compact the city is.

To walk from one extreme corner of downtown to the other only takes forty minutes. And it's mostly flat. So if you're in the middle of downtown nothing is more than an easy twenty-minute walk away.

You definitely shouldn't spend all your time downtown, though, but even then every neighborhood's within biking distance, some are walkable, and they're never more than 40 minutes away by bus.

Don't forget, If you ever get spun around and aren't sure which way's which, look for the mountains. That way's north! 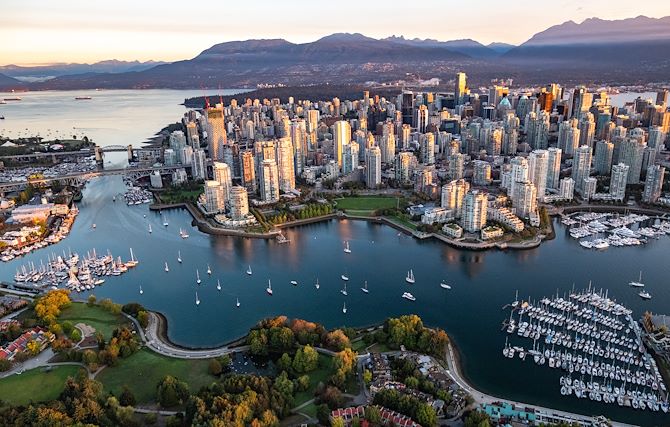 Listing the reasons to visit Vancouver is far too easy. From its good(ish) weather, all the nature your heart could desire, the cool neighborhoods with the most vibrant foods, No matter where you are coming from, we will make you feel at home.

If you want to go from the city to the mountains within an hour, there's no better place than Vancouver. There are three main mountains nearby: Cypress Mountain, Mount Seymour and Grouse Mountain. Cypress is a favorite for local snowboarders and skiers as it has the best facilities, and it was part of the 2010 Winter Olympics. Grouse, on the other hand, is a popular option in the summertime when visitors can tackle the Grouse Grind and enjoy the daily lumberjack show on top of the mountain.

Vancouver is home to some of the coolest neighbourhoods in Canada. Main Street and Commercial Drive are known for their independent boutiques and restaurants, while Yaletown has some of the best patios for summertime dining due to its former life as a warehouse district. Meanwhile, Gastown is the city's most historic area.

Vancouver's weather is not perfect, thanks to its location in the rainy Pacific Northwest region. Don't let a little drizzle ruin your fun here, throw on a rain jacket and a pair of boots and explore!

With so much to see and do in our beautiful city, you will never want to leave. 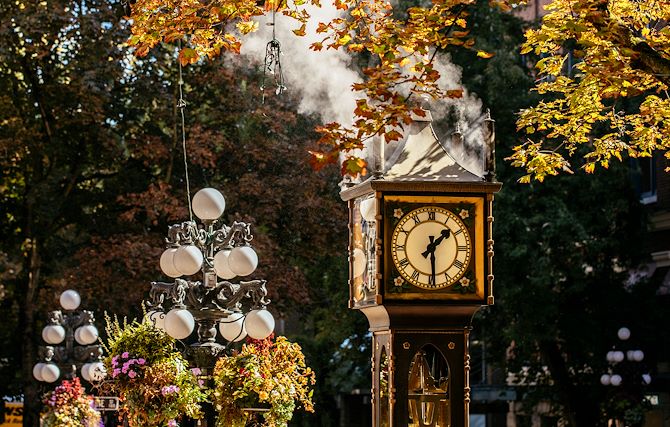 The famous Gastown Steam Clock is just that… FAMOUS! Being featured in countless movie productions is cool, but the reason and history behind it might be even cooler.

You'll see a glimpse of our famous Steam Clock in TV shows such as Arrow, Once Upon a Time, The Magicians and Supernatural and movies including Legends of the Fall, Twilight and The Mountain Between Us, Gastown's played best supporting actor to them all.

Under Vancouver, there runs a series of steam pipes connected to a generating plant at Georgia and Beatty Streets. The system provides heat to most of the downtown core, and provides the steam for the whistles of the Gastown steam clock.

Saying the clock is "steam-powered" is not exactly correct, as the clockwork itself is powered by descending weights. The mini-steam engine at the base of the clock case takes up the role of the human "winder" by raising a series of ball weights and delivering the weights to the clock drive train. But the steam engine is connected by a rubber belt to an electric motor hidden from view - much more reliable than steam power.

Every 15 minutes, the two-ton Steam Clock shows off a bit, whistling and shooting steam from its five whistles in its version of the Westminster Chime. On the hour it marks each hour with a toot from each whistle.

There are six other working "Steam" Clocks in the world. The lesson was learned, though - only the whistles are steam and the clockworks are electric. 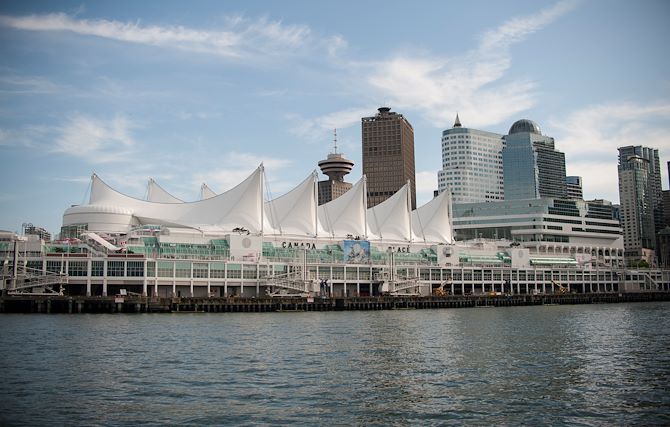 Canada Place, most recognizable by its "sails", is the large building situated on the downtown waterfront. It is the home of the Vancouver Convention Centre, the Pan Pacific Vancouver Hotel, Vancouver's World Trade Centre, and the virtual flight ride FlyOver Canada.

FlyOver Canada is the Canada Place attraction and shouldn't be missed! Soaring through the sky over Canada's magical landscape is truly a virtual dream come true.

Since opening in June 2013, FlyOver Canada has brought smiles to over two million riders of all ages, from every corner of Canada and over 40 nations worldwide.

During the Ultimate Flying Ride you will see numerous cities and vistas across the country. The production team for FlyOver Canada were able to select 18 scenes from over 100 hours of footage to represent Canada in the ride film. Take a peak at this fun promotional video the FlyOver team put together. 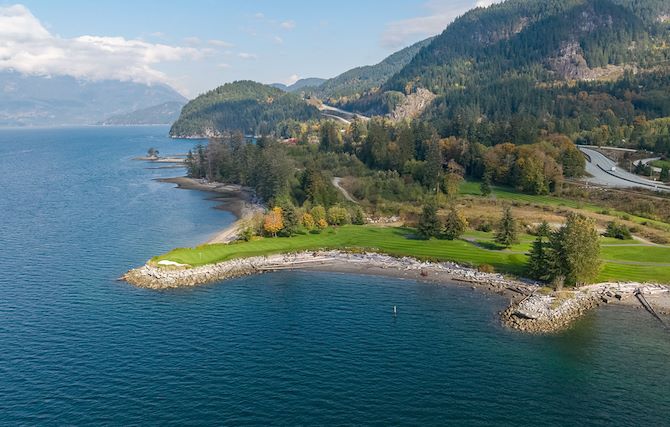 Golfing with an ocean, mountain, and forest view, could a round of golf get any more perfect?

Even for the well-seasoned traveller, Vancouver has the power to astonish: the city is one of those rare places where you can golf, sail and ski - all in one day.  Add to this a mild climate, where greens are green year-round, and it's no surprise that Vancouver golf courses are some of the top golf courses in North America.

While most people think of Vancouver as a big city with its nightlife and shopping, there are an excellent range of Vancouver golf courses, many within a short distance of downtown.  This means that your business trip, conference or getaway weekend can easily accommodate a round of golf, or you can book your own custom Vancouver Golf Package.  As a bonus, most Vancouver golf courses are open year-round. 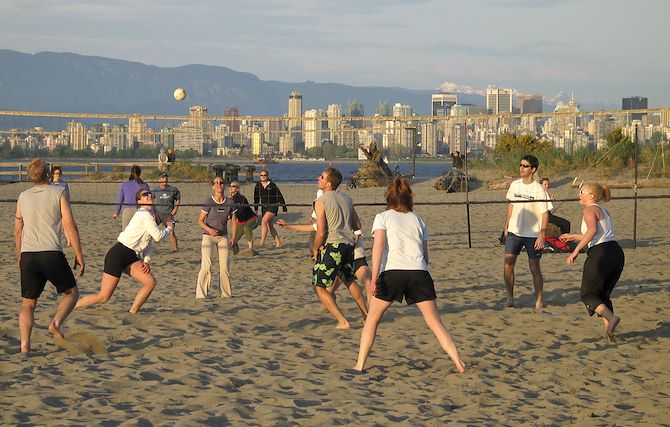 Vancouver is one of the top ten beach cities in the world according to National Geographic. Let us help you choose which one of our beaches is the best for you. The beach is that way >> here's our top 4.

English Bay is by far downtown's busiest beach because of its easy access. Located at the intersection of busy Davie and Denman streets in the West End, how amazing it is that you can go from skyscrapers to sea in moments. The boundless amenities make it our top pick. Umbrella and chair rentals, Kayak rentals and storage, Mobi-Mat accessible beach pathway and two water wheelchairs make it accessible to so many. It's easy to stock up on supplies or get a bite to eat at one of the food trucks (Rain or Shine ice cream and San Juan Bolivian food are regulars), or at trendy beachfront Cactus Club Cafe.

"Kitsilano" is a mouthful, so everyone calls it "Kits." And everyone knows Kits Beach. It's gotta be the most well-known beach in Vancouver, and it's certainly the most happening one during the summer. It's large hillside green space makes it a wonderful stop for groups and for the traveller who would like to just sit and read by the water.

Spanish Banks covers a mile-long stretch at the farthest western edge of the City of Vancouver. For its endless low tides, being the only kite-boarding-approved beach, the most family-friendly beach, and, along with Locarno Beach, having the best views of English Bay, downtown, and the local Mountains.

Third beach is for those who enjoy a relaxing, natural beach. It's quiet, located far from the sounds and action of the city on the edge of Stanley Park, backed by huge trees and nothing else. But still close to downtown. The views, beautiful sunsets, and nice people will have you coming back time and time again. 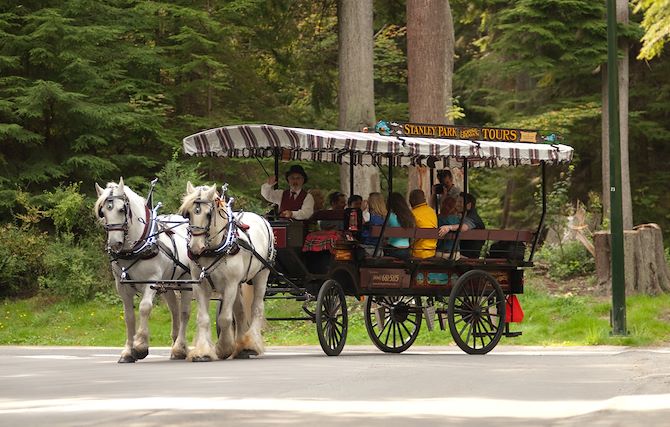 Stanley Park is a magnificent green oasis in the midst of the urban landscape of Vancouver.

Stanley Park is a traveler's dream in the city. It's ease of access from downtown and boundless trails will have you blissfully wandering our city forest for hours. The best way to experience it is to rent a bicycle just outside the park. Ride or walk along Stanley Park's famous 10km Seawall with its scenic views of water, mountains, sky, and majestic trees. Discover kilometres of trails, beautiful beaches, local wildlife, great eats, natural, cultural and historical landmarks, along with many other adventures.

For those wanting a ride on something dating back even further than the locomotive, the park offers Stanley Park Horse-Drawn Tours March through October. The one-hour tours are relaxing and educational as passengers learn about the park and its surroundings with a route that takes in many of the more popular spots. 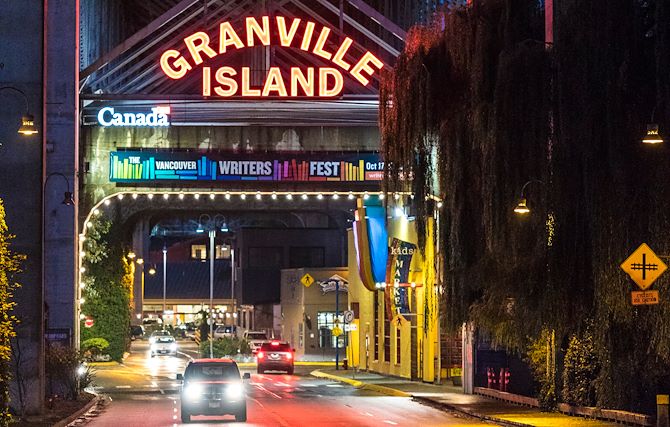 Granville Island, the Island that won't take a 2 hour ferry ride to get to! This charming cultural & artistic neighbourhood with its daily public market with 50+ food vendors is a must stop when in town.

Granville Island was home to factories, plants and sawmills. Things are a little different today! Granville Island is both a locals' favorite and a huge draw for visitors. Technically a sandspit and not an island, the neighbourhood sits just south of the downtown peninsula, right under the Granville Bridge. The Granville Island Public Market is a wonder to experience! Vancouver top chefs are often spotted shopping here for high-quality and rare ingredients for their menus. The indoor market features a fascinating assortment of colourful food and produce stores, showcasing handcrafted products and the very finest in unique gifts. All fresh from the ocean, the oven or the field. Granville is also one of the city's most important cultural districts with theatres, artisan workshops and craft studios.